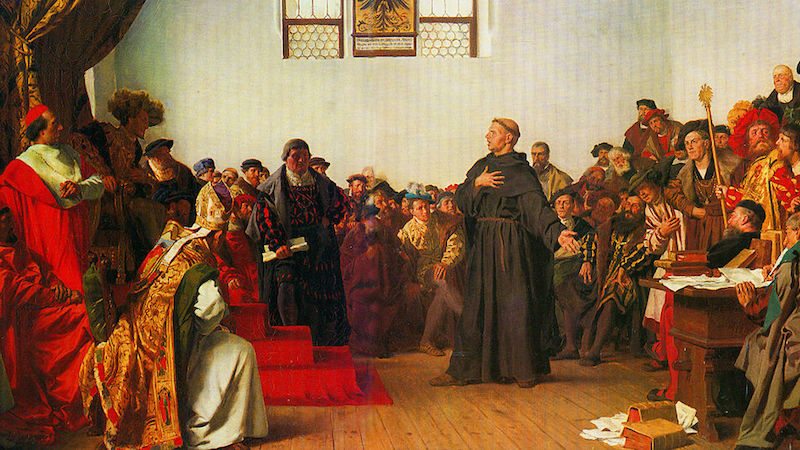 When Protestantism shall stretch her hand across the gulf to grasp the hand of the Roman power, when she shall reach over the abyss to clasp hands with spiritualism, when, under the influence of this threefold union, our country shall repudiate every principle of its Constitution as a Protestant and republican government and shall make provision for the propagation of papal falsehoods and delusions, then we may know that the time has come for the marvelous working of Satan and that the end is near.—Testimonies for the Church 5:451 (1885).

In the movements now in progress in the United States to secure for the institutions and usages of the church the support of the state, Protestants are following in the steps of papists. Nay, more, they are opening the door for the papacy to regain in Protestant America the supremacy which she has lost in the Old World.—The Great Controversy, 573 (1911).

When the law of God has been made void and apostasy becomes a national sin, the Lord will work in behalf of His people.—Selected Messages 3:388 (1889). LDE 133.3

To secure popularity and patronage, legislators will yield to the demand for a Sunday law By the decree enforcing the institution of the papacy in violation of the law of God our nation will disconnect herself fully from righteousness. LDE 132.4

The people of the United States have been a favored people, but when they restrict religious liberty, surrender Protestantism, and give countenance to popery, the measure of their guilt will be full, and “national apostasy” will be registered in the books of heaven.—The Review and Herald, May 2, 1893. LDE 133.4

The whole world is to be stirred with enmity against Seventh-day Adventists because they will not yield homage to the papacy by honoring Sunday, the institution of this antichristian power.—Testimonies to Ministers and Gospel Workers, 37 (1893). LDE 136.2

Those who trample upon God's law make human laws which they will force the people to accept. Men will devise and counsel and plan what they will do. The whole world keeps Sunday, they say, and why should not this people, who are so few in number, do according to the laws of the land?—Manuscript 163, 1897. LDE 136.3

The so-called Christian world is to be the theater of great and decisive actions. Men in authority will enact laws controlling the conscience, after the example of the papacy. Babylon will make all nations drink of the wine of the wrath of her fornication. Every nation will be involved. Of this time John the Revelator declares: [Revelation 18:3-7; 17:13, 14, quoted]. “These have one mind.” There will be a universal bond of union, one great harmony, a confederacy of Satan's forces. “And shall give their power and strength unto the beast.” Thus is manifested the same arbitrary, oppressive power against religious liberty—freedom to worship God according to the dictates of conscience—as was manifested by the papacy, when in the past it persecuted those who dared to refuse to conform with the religious rites and ceremonies of Romanism.—Selected Messages 3:392 (1891). LDE 136.4

In the great conflict between faith and unbelief the whole Christian world will be involved.—The Review and Herald, February 7, 1893. LDE 137.1

All Christendom will be divided into two great classes—those who keep the commandments of God and the faith of Jesus, and those who worship the beast and his image and receive his mark.—The Great Controversy, 450 (1911). LDE 137.2

As the Sabbath has become the special point of controversy throughout Christendom and religious and secular authorities have combined to enforce the observance of the Sunday, the persistent refusal of a small minority to yield to the popular demand will make them objects of universal execration.—The Great Controversy, 615 (1911).LDE 137.3